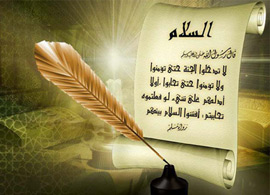 This is a difficult age of transition, full of the challenges that darkness and decadence bring about. Technology is used to mobilize resources against truth, but Internet is also a lovely tool by which to revitalize the Dīn and bring Muslims closer together worldwide. We thus decided, as part of an ongoing effort, to make use of that Divine gift, since we realize the formidable potential of an enlightened Islamic community.  Amid engineered ignorance and misguidance all around them, the Muslims who have clung to mainstream Islam are brimful of desire for revival. We are interested in interacting with those Muslims through this website.


We discern, however, a major stumbling block to living out Islam as opposed to discussing it: Muslims have been breaking up into more and more sectarian groupings, the political and spiritual heads of the generality of those groupings are largely after money and followers, though they have different valuable gems to contribute to the ummah, and adherence to such separate entities stops Muslims from getting together to put the Dīn into practice.


We want to emphasize working with Muslims to implement practical steps and solutions for the reinvigoration of the Dīn. In order to achieve that, we have set our unflinching resolve on making this website free of soliciting any money or followers.  We are not interested in that. We are not concerned about setting up another organization or using Islam to gain some advantage.


This website is for the Islamic Community, for sharing things with the mainstream Muslims so as to join correct knowledge and healthy realistic action [In that regard, we shall announce and promote workable projects that unify Muslims and spur them into joining understanding and actualization].