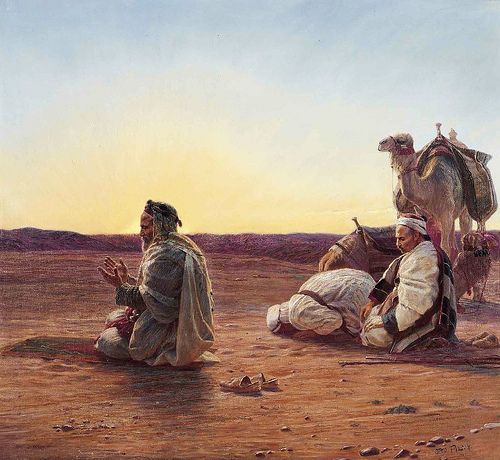 Al-Uqlƒ´shƒ´, the wonderfully gentle Andalusian savant whose work The Lasting Right Sayings we translated some years ago, said that no scholarly disagreement existed as to Allah, Exalted is He, being described by the Name al-Ma`b≈´d, the Worshipped. He further said in that regard:

“I did not come across this Name in a transmitted report. The verbal form, however, occurred in more than one place in the Qur’ƒÅn.

If the meaning of ‘ibƒÅdah is obedience of Allah (of His commands and prohibitions) out of one’s volition and choice, earning and true knowledge, then it falls within the scope of specific annexation, since only an elite of creatures worship Him in this manner, namely, the angels and all the mu’min≈´n (from among men and jinn). It is on this ‘ibƒÅdah that reward and punishment depend, and the doer thereof is called a worshipper (‘ƒÅbid) of Allah the Exalted.

If, instead, the meaning of ‘ibƒÅdah is submission and humble surrender, confirmation of the truth by the innate state (fitrah) and testimony by the tongue of the state, it falls within the semantic compass of the general annexation, since every existent in creation surrenders to Allah in glorifying prostration, with awe and reverence, even though the one who covers up the truth (the kƒÅfir) opposes Him in his inner belief and outer utterance. That is how the following two statements of His, glory to Him, have been interpreted: «Everyone in heaven and earth prostrates to AllƒÅh willingly or unwillingly» (S≈´rah ar-Ra`d: 15); «If you asked them who created them, they would say, ‘AllƒÅh!’ So how they have been perverted away from the truth?» (S≈´rah az-Zukhruf: 87).

Even though the kƒÅfir is in his outer guise and state an ‘ƒÅbid, a worshipper of Allah, may He be Exalted, such a term is not applied to him, and he is rather termed a sinful rebel, since the focus is on his will, choice and earning that comes over him from his Lord, and on which reward or lack thereof depends. As for the attestation by his inborn state (fitrah), it does not save him from punishment. Every legally accountable creature (mukallaf) is bound to be intimately convinced of the fact that there is no one worshipped but Allah, and he is bound to worship Him as He commanded him through His statements: «Worship AllƒÅh and do not associate anything with Him» (S≈´rah an-NisƒÅ’: 36); «They were only ordered to worship AllƒÅh, making their dƒ´n sincerely His» (S≈´rah al-Bayyinah: 5).

If he worships in this manner, he is said to make ‘ibƒÅdah of his Lord, i.e. he humbly submits to Him, as denoted by His statement: «You alone we worship» (S≈´rah al-FƒÅtihah: 15)”.

This Name has also been mentioned by Judge Ab≈´ Bakr b. al-‘Arabƒ´ at the end of his book on this topic, Al-Amad al-AqsƒÅ, when dealing with the Names of the Originator that are necessarily owed to Him by the action of other than Him (in this case the worship of Him by His creatures):

He stated there (echoing Al-Uqlƒ´shƒ´ in that regard) that the Islamic nation was unanimous in ascribing to Him this Name.

Al-Qurtubƒ´ said that he mentioned this Name after al-Mawj≈´d (the Existent), because the truly Existent in a perfect manner Whose existence is from His Essence to His Essence, and from Whose Existence every existent issues forth, is the One worthy of surrendering to and worshipping, and whose Lordship is worthy of being confirmed, without denying him, and whose Existence is confirmed so that the worshipper is not remiss in making ‘ibƒÅdah of the One he worships.

Next time: His Name al-Madhk≈´r (the Remembered)