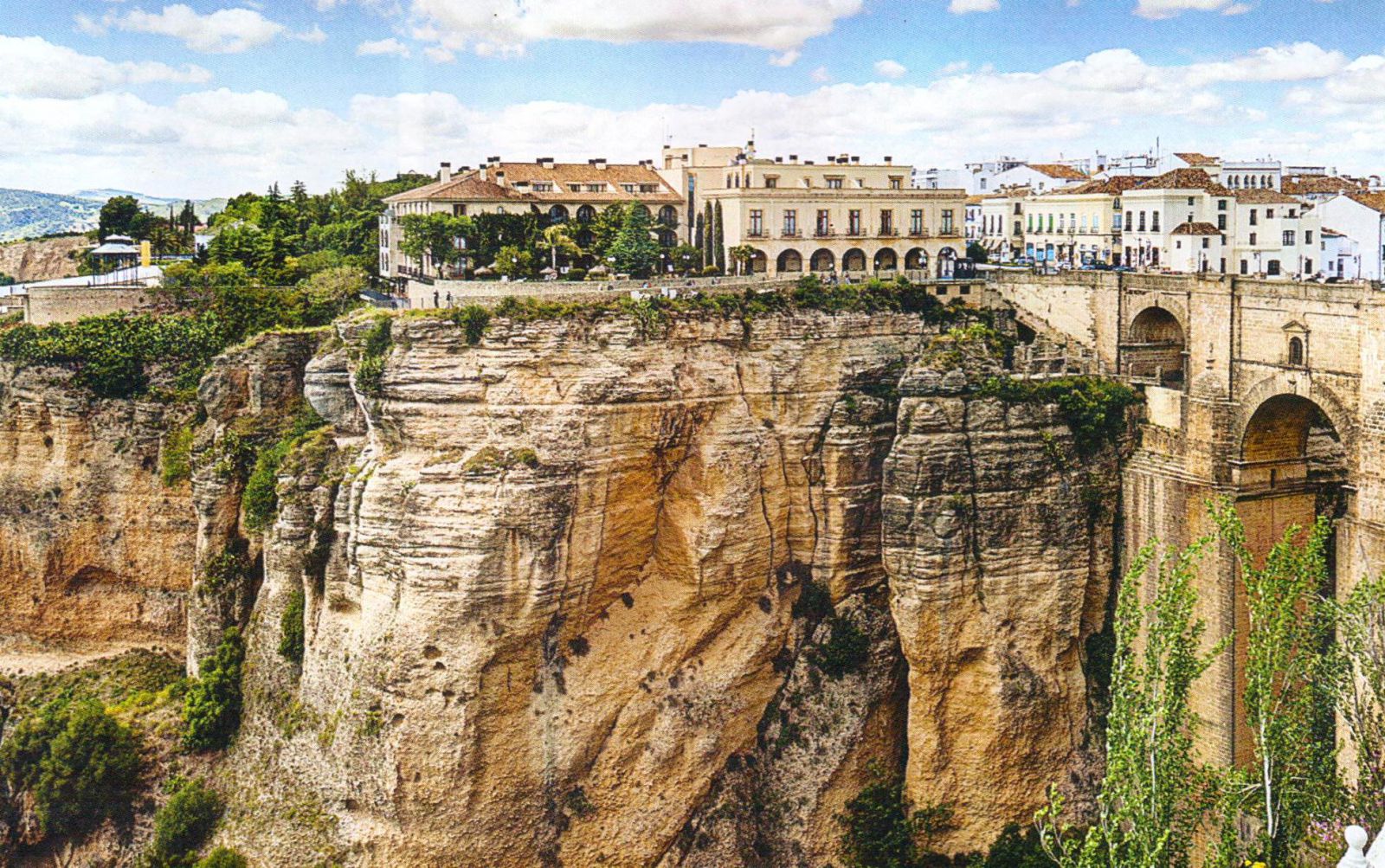 IN OUR INBOX FROM RONDA

Ibn ‘AbbńĀd ar-Rundńę, the Sufi master from the Islamic West, bequeathed two precious set of epistles, a short-size and a large-size one.

The short-size collection was published by a perennialist house in its English translation, under the title “Ibn Abbad of Ronda – Letters on the Sufi path”.

Here we offer, to our knowledge for the first time in English, the main section of epistle no. 6 from the larger collection, titled Nuzhah an-NńĀzir al-Muta’ammil wa-Qayd as-SńĀ’ir al-Musta`jil (The Promenade of the reflective prober and the fetter for the hasty traveller).

In it, no doubt, he is personally addressing us, here and now, warning us against the pervasive maladies of our own age:

“I have received your letter, where you mention the death of Sidi al-HńĀjj [1]. Allah, Exalted is He, will have mercy on him, cool his shrine and reward him abundantly on our behalf. What a nice companion and beloved he was for you! He has now found relief from the fatigues of this world and from its severe trials, whereas we are still prey to them after his departure.

{The dead is not he who dies and finds rest *

The dead is only the dead among the living.}

The heaviest trial we have been pushed to endure is the trial about the Dńęn, since in its respect the affair might lead to an evil outcome, we seek refuge in Allah from that, and since our rescue from it is clouded in utmost obscurity and uncertainty. Those who point to the path of rescue are like the legendary griffon, and are not to be found at all. Had it not been for the hardness that has engulfed our hearts as a result of the traces left by all of this, we would have died of grief, due to the calamities that have struck us, shutting in our faces the door of mercy and severing from us the constituents of Divine protection. To Allah we belong and unto Him we are ever returning.

The Pious Predecessors, may Allah be pleased with them, used to fear the trials that might impair their Dńęn, so they wished to die on the state of unalloyed purity they were upon, before being afflicted with what might act as a barrier to that state of theirs.

What was that state? It was what was yielded by their sound ńęmńĀn and their pure inner certitude, thanks to the lights of Prophethood that had poured over them from their discarding this world and preferring the Hereafter over it, and thanks to their earnest and determined striving on behalf of what would lead to the object of that noble quest.

In that regard, they were like the one who has gained an elixir by which he finds a path unto a great king, then feels there is someone else who disputes with him ownership of that elixir and seeks to overcome him in that dispute: How do you think his state of guarded circumspection would be? In the hadith related by AbŇę Juhayfah, may Allah be pleased with him [2], we find that he said: The Messenger of Allah, SallallńĀhu ‘alayhi wa-Sallam, came out towards us, the colour having changed on his face, and said: “The purity of this world has vanished, and only turbidity is left. Today, death is a gift for every Muslim.” If the ascription of this report to the Messenger of Allah, SallallńĀhu ‘alayhi wa-Sallam, is sound [3], it is in other words sound that he [SallallńĀhu ‘alayhi wa-Sallam] uttered it, or that it was uttered by one of his Companions, may Allah be pleased with them, during their wholesome age, what could our statement then be?

In any event, the like of this utterance stems from a heart enlivened by ńęmńĀn, aware of its increase and decrease, knowledgeable about purity and turbidity, what is left of the two of them, and what has parted away.

As for us, our hearts have died, and the rust from sins has seized them, whereupon our ńęmńĀn in Allah and the Last Day has waned, and our speech about that has become like that of a scoffing mocker. We have leaned over this world where we consume and live, with all that we only attained some marginal feathers of it, and we have found in it the coolness of our eye, with all that the end-result of it is mere falsehood and lie. We accordingly deem the prolongation of our life in it, even one as short as an extra hour, a refreshing booty, in spite of the various tribulations and miseries we suffer in it. If a matter we expect death to lurk behind it befalls us, it is as if the end of the world for us, and as if the world has collapsed upon us due to us feeling the end approaching.

Where are we, then, compared to the age where death was wished for? Nay, what is our association with that age to begin with? If we had lived during it, we would have been among the successful, but we have been deferred to a time when hearts are dead and worries are exacerbated, on account of the lights of ńęmńĀn being wrested from us and the armies of the ShaytńĀn having grabbed control over them. How proper for us to cry after shedding tears of blood! How worthy we are to be in a state where no earth carries us and no heaven shades us.

The worst calamity for us is that we do not find anyone alerting us to the like of this and reviving our hearts either by (spiritual) state or by utterance. We only find those who make us even more engrossed in falsehood, who entrench us further in misguidance. They are the mendacious imposters whom our adviser and intercessor, SallallńĀhu ‘alayhi wa-Sallam, feared for us more than he would fear for us DajjńĀl the Antichrist. I swear: if he were to surface soon, he would find that these people have already pledged obedience to him and have answered his call, without him needing any huge effort or toil, inasmuch as his friends have fully spared him that burden.

If, in fact, the kńĀfir openly invited the mu’min to kufr, the latter would not accept that from him and would not accede to his call. If, instead, he employed subtle means in that and prevailed over him by confusing matters for him, in a manner that suits the mu’min’s condition, gently attracting him towards his way, step by step, in a covert fashion, and stealing him away while unawares, he would realize his objectives in full.

In the hadith on faith-testing ordeals, which defines who the culprits in them are, we find that the Messenger of Allah, SallallńĀhu ‘alayhi wa-Sallam, said: “Callers by the gates of Jahannam: They cast inside it whoever answers their call”; and that he replied to Hudhayfah (b. al-YamńĀn), may Allah be pleased with him, when the latter asked him about their descriptive attribute, with his words, SallallńĀhu ‘alayhi wa-Sallam: “They are a people with our skins, who speak in our own languages” [4], a hint to the mutual affinity and proximity (between them and ourselves) we have mentioned above, and Allah knows best.

Iblńęs was only able to entice the famous Israelite worshipper when he built a mosque in front of his mosque, and exceeded the worshipper’s own self-exertion in devotional practices. At that point, Iblńęs was able to have him in his clutch. Misguidance might set in precisely through that by which guidance materializes. Success is only attained by the one for whom Allah’s solicitude has been foreordained: «» (SŇęrah al-Baqarah: 26).

Whilst I was busy writing this message, I received a letter of yours that included information about a number of matters. One of them was the question raised by the sharńęf [5] you have mentioned therein. What he found problematic in that respect resulted in his deluded belief that when the spirit is brought back after its departure from the body, that is escorted by hardship. Where did he get that from?

If he draws an analogy between that and the familiar scenario of sleep, there is no hardship in that, whether coming back or going out. As for drawing an analogy with the state of death, no hardship is witnessed at the time of coming back. Hardship is only witnessed, at that time, when the spirit exits the body. Drawing an analogy between the spirit coming out in the isthmus (barzakh) between life and death and its coming out at the time of death is unsound, because the reason necessitating the presence of pain is negated in the former instance, since the human condition, which feels worldly pain and pleasures, is lacking, and the hardship the sharńęf mentioned is incidental thereto.

What we stated is more than enough to lift away ambiguity in this connection. Providing a detailed explanation of this matter is a futile redundancy, and time constraints prevent us from spreading it out.

I fail to understand how this matter eluded the attention of the jurists and virtuous people who, as mentioned by you, were approached by the sharńęf with this question, without being able to stumble upon anyone who could quench his thirst for understanding. Either, when you mentioned what was found problematic, they had not properly examined its context, or “the time had come for AbŇę Hanńęfah to stretch his legs”.”

[3] It is difficult to locate this report in the existing hadith literature.