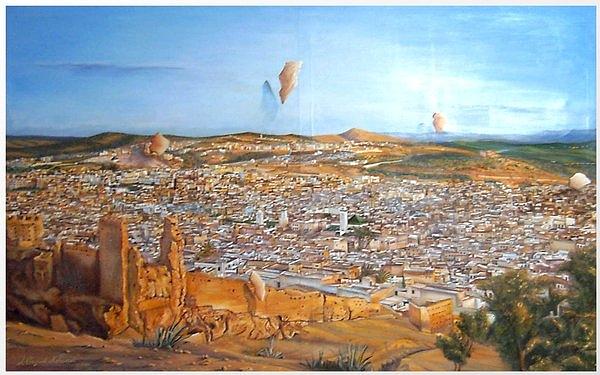 THE SHIP OF RESCUE

Beginning with this contribution, we want to facilitate understanding of the resplendent wazīfah of Shaykh Zarrūq, which is renowned throughout the world.

Why? Because the guide (Shaykh) of a Sufi path has made it incumbent on himself to persistently recite it, day in and day out, and so have his students, aspirant travelers in his path, and affiliates to it.

It is an ensemble of Qur’anic signs, formulas of remembrance and supplications.

In modern Arabic, we use the word wazīfah for a function which is assigned to someone for him to regularly perform it, for instance the cluster of responsibilities and duties of an employee appointed to a post or an administrator holding an office.

The guide in a Sufi path or a student of his recites other formulas of remembrance or devotional litanies, but not all of them are persistently engaged in as if they were an obligation.

Shaykh Zarruq had more than one wazīfah (= a number of wazā’if). But whenever we speak of his wazīfah, we mean by it:

“The Ship of rescue for whomever in Allah seeks refuge” (Safīnah an-najāt li-man ilallāh iltajā) – Though the past tense is used (iltajā), which can be literally translated as “sought refuge”, the correct choice is to translate it in the present tense.

What was Shaykh Zarrūq telling us?

That to traverse the perilous sea of this transient world, we need to board a solid sea which convoys us safely to the shore. Otherwise we drown, especially in the ages of receding goodness Shaykh Zarrūq meant his wazīfah for.

The Ship is already there. It doesn’t have to be built afresh. It simply has to be boarded, and the voyage to be made aboard it.

Shaykh Zarrūq is quoted as having said:

‘I guarantee to whoever persists in reciting the wazīfah in the morning and in the evening, in performing salāt in congregation and in fasting on Mondays and Thursdays, that he will die on Islam and that he will not be abased among people. If he seeks my succour, I will succour him.’

How did it spread all over the planet?

Is it true that Hasan al-Bannā, the founder of the Ikhwān movement, unfailingly recited it, as did his learned father?

The final version of the wazīfah was gathered at the Prophetic rawdah in al-Madīnah: Are the accounts that Shaykh Zarrūq was instructed on the wazīfah by the Prophet himself, Sallallāhu ‘alayhi wa-Sallam, accurate?

Who said that consistent recitation of it protects one from gross and subtle shirk, causes angels to record an ample reward for him, spares him solitude, blindness and harmfulness, and many other laudable things?

Why do we say that it consists of nothing but what is in the Book and the Sunnah?

As Shaykh Zarruq once declaimed:

Board our Ark, if you’re endowed with intellect *

It sails forward by truth actualized and the light of affection

Its oars: repelling trials and hardships *

Its firm anchor to safety is guiding