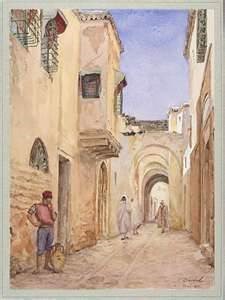 An early attempt at unification of worship:

In conformity with the general modus operandi of the Muslim nation, the issue of unified festive seasons for all mu’minūn has generated precisely a further and traumatic schismatic division within its folds. As the advocates of the two prevalent juristic poles have settled in their irreconcilable camps, the unearthing of this informed ijtihād from the Islamic West might be exactly the catalyst needed for a renewed attempt at fraternal consolidation of the Prophetic nation.

Contrary to the deliberate rewriting of historical realities by the so‐called Salafi movement, “madhabism”, as they derogatorily refer to a phenomenon which involved millions of Muslim far superior to their present‐day counterparts, never tore apart the unity of the ummah. Scholars from the different juristic methodologies mutually exchanged their gifts in a most respectful mode all over the Abode of Islam.

In one of the forthcoming issues of the present magazine, Allah willing, within our regular column Stars of the African Firmament, we shall see how Mālikī and Hanafī muftis and judges harmoniously co‐existed and co‐operated in Ottoman‐administered Tunisia, and how the syllabus of the great Zaytūnah Mosque included the central works of both such jurisprudential schools.

Conversely, the “Salafi” movement has left the unity of Ahl as‐Sunnah in tatters, even when celebrating a festivity aimed at making the Muslims one gathered voice such as the ‘Īd.

This month, we shall cast a synthetic look at the fatwā passed in the 19th century CE by the revered Tunisian Shaykh Ju`ayyit, born at the beginning of May 1886 (1303 AH), who died in January 1970 (1389 AH). He had a number of scholarly arguments with one of the teachers of Shaykh Muhammad ash‐Shādhilī an‐Nayfar, i.e. the mufassir, muhaddith and jurisprudent at‐Tāhir b. ‘Āshūr [See below, in the section devoted to reviews, for a presentation of a famous book of his in its English translation].

The said fatwā concerns the legal validity of unifying the ‘Īds and the seasonal Islamic events.

The question posed to Shaykh Ju`ayyit mentioned that in 1956 the Hashemite Jordanian government had mooted the idea of convening a general meeting of legislators from Islamic countries, with a view to researching the issue of the suggested unification of the days of the two ‘Īds and fasting throughout Islamic

countries [At that time, of course, Muslims lived predominantly in their traditional lands, and the subject had not yet acquired worldwide relevance].

Eventually, the refusal by some Islamic countries to participate in any such gathering impeded its materialization.

The General Secretariat of the Cairo‐based League of Arab States had noticed the temporal discrepancy in the days of the two ‘Īds and fasting among the different Islamic countries, at the time that the exact determination of the birth of the new moon had already been rendered possible by the advancement in the science of astronomy, and the village of Greenwich had become the standard of geographical longitude and thus of the division of the world into precise meridians with their specific time zones.

The Secretariat of the said League felt (rather groundlessly) that the venerably ennobled city of Makkah “was undoubtedly the geographical hub of the Islamic Dīn”, due to the fact that it represented the universal qiblah of prayer.

The League felt it necessary to put an end to “regional anarchy” in the Islamic territories, and identify a centralized point of confluence of directives issued on seasonal worship. It thus recommended that the beginning of the month of Ramadān in Makkah should serve as the global starting point of the fast (as opposed to the compulsory prayers) for all the Muslims, regardless of whether such day started in other localities at the beginning or end of daytime, or at its median point. Makkah was further singled out in the aforesaid question by the fact “that the Qur’ān was revealed in it”, though that was obviously a bizarre half-truth, as every Muslim is aware of. In particular, the question referred to the fact that the Qur’ān had been sent down «as guidance for mankind, with Clear Signs containing guidance and discrimination», being a direct quotation from āyah 185 of Sūrah al‐Baqarah, the historical revelation of which, however, took place in al‐ Madīnah!

Shaykh Ju`ayyit inaugurated his reply, i.e. the text of the fatwā as such, by emphasizing the point that fasting Ramadān and the proclamation of ‘Īd al-Fitr had both been made conditional in Islam on the visible appearance of the new moon, and on the completion of thirty days in the previous month of Sha`bān.

In some regions, the new moon appears while it is concealed in others, due to a number of reasons, inclusive of possible cloudiness in the sky. The result of such astronomical phenomenon, the shaykh

noted, was the diversity of times for fasting and celebrating its end among diverse Muslim countries.

Islam, he went on to say, had long remained unperturbed by such phenomenon and did not attempt to eradicate it, since it had no scientific means of communication at its disposal for its followers to instantly pass on news on the sighting of the new moon to distant localities.

In the light of the developments in such means of communication in the modern age, Shaykh Ju`ayyit contended, he favoured the unification of Dīnī occurrences, as he felt that legal reflection on the issue demanded that such route be taken.

Such unification would, in his view, foster a feeling of Dīn‐related connection between the disparate Islamic peoples, reduce their scatteredness and fragmentation, and promote mutually cementing brotherhood.

That would echo the Divine instruction in āyah 103 of Sūrah Āl ‘Imrān that the mu’minūn should hold fast together to Allah’s unifying Rope.

An example of the ‘ulamā’s keenness to nurture such fraternal unity was the juristic view to the effect that holding a second congregational prayer in the same mosque represented a reprehensible act, and that a

Jum`ah running simultaneously with the one taking place in the main Jum`ah mosque of a locality, so long as space for praying in the latter was still able to be filled up, was a similarly disliked act.

However, Shaykh Ju`ayyit went on to affirm in his juristic response, Islam had connected the performance of certain acts to specified causes (asbāb) which could not be ignored, as with the setting in of dawn and zawāl which are sine qua non conditional causes for the

existence and fulfillment of the obligation to perform the early Morning and the Noon prayers respectively. The times when such prefatory causes of ‘ibādāt materialize naturally vary from place to place, within a continuous 24 hour cycle around the world.

As for fasting and the ‘Īd, by contrast, the Law‐Giver did not make the protrusion of the crescent from the rays of the sun a cause for the setting in of the obligation to commence or end the fast. Rather, the Lawgiver made the cause (sabab) of such twin events the sighting of the crescent moving out of or separating from the solar rays, alternatively the completion of 30 days in the preceding month. The proof of

As a result of the aforesaid, Shaykh Ju`ayyit asserted, the learned people did not pay regard to astronomers’ decisive demarcation of the birth of the new moon in any place where the start or conclusion of fasting was incumbent, even though such astronomical calculation was not open to doubt.

The only question left to be answered would thus be whether the sighting of the new moon (as the moon is one) by Muslims in one locality should be deemed to be binding on the Muslims fasting in other places, or not binding on the latter by analogy with the case of the five compulsory prayers. It is on this aspect that the mujtahids have acceptably differed in their independent contemplative probing.

Among the scholars there have been those asseverating that any such sighting could not be universally binding, based on paying consideration to the different lunar rising points in different areas, whence the need for every region to heed its own particular rising place, without making its sighting applicable to geographical areas which do not share it, this being the traditional position adopted in such as South Africa. The rationale for such ruling, being the authentic view of the Shāfi`iyyah and the position chosen by a group of jurists from the Mālikiyyah and the Hanafiyyah, is that the members of a community in one area are only addressed to fast or not to fast in accordance with what they witness in their area. The great Egyptian polymath al‐Qarāfī strongly invalidated any other position.

The opposite standpoint held that it is incumbent to act upon a lunar sighting, whether or not one’s geographical area shares the same rising point with the one where the moon has been sighted. This view has been adopted in the Mālikī, Hanafī and Hanbalī madhāhib. People in the Islamic east, in conformity therewith, thus fasted pursuant to an instance of verified moon sighting in the west. The Prophetic address in the afore‐quoted hadīth, indeed, does not single out any area singularly or independently, nay, it is an address directed to all Muslims on whom it validly applies. If, therefore, the people of one country have seen the crescent, the “Muslims” have seen it, and the Muslims in all other areas, too, are bound to act by such sighting from their fellow coreligionists.

This counter‐view does not entail any imposition of fasting (or celebrating ‘Īd) on some Muslims “before fasting has become obligatory for them”, given that juristic causes of acts are based on what the Lawgiver alone has determined, and one has to submissively obey them.

“The learned people did not pay regard to astronomers’ decisive

Because of his aforesaid stance, Shaykh Ju`ayyit leaned towards the latter view, on condition that no specific land be used to determine the sighting of the moon for Ramadān or ‘Īd, however venerated and hallowed such locality might be, Makkah included. The duty to sight the moon would thus fall on the Muslims in all countries of the world. Wherever it is sighted, the Muslim polity worldwide would act on it.

No attention, in that regard, ought to be paid to astronomers’ calculation that a new moon has already been born, due to the fact that such calculation merely indicates the possibility of actually sighting such moon, while the actual sighting is the occurrence set out by the Lawgiver as the (sole) cause for commencing or terminating the fast,  as such clearly distinct from the occurrence of the mere theoretical possibility of beholding such moon, and Allah knows best.