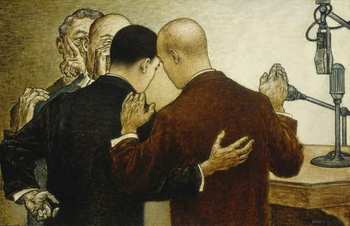 In the section on following His commands, specifically, as an attachment to Divine commands, ritual purity and the harms associated with it, Zarruq dealt with the issue of whispering (waswasah) as the first such potential harm.

Hereunder is the first part thereon, comprising the basic text and the commentary, distinguished from one another by the use of the bold for the basic text:

“(One of its harms), that is, one of the contingent aspects that corrupt its reality or its perfection, (is whispering), i.e. self-talk upholding what is discarded or thoughts alighting by the heart either from the ShaytńĀn or from the self, which invites to some evil or to some good engrossing one away from what is better than it or leading to an evil by which that good cannot be discharged.

There necessarily has to be a root whispering stems from, which takes the form of one of two matters the author alluded to by his statement:

(Its root is ignorance of the Sunnah). Al-GhazńĀlńę said [in IhyńĀ’ ‘UlŇęm ad-Dńęn]: “Part of the feebleness of a person’s knowledge is his fondness of water in ritual purification.” In other words: That is so since the savant is aware of thoughts and is able to sift out a good thought from an evil one, just as he can differentiate between inspiration and whispering. He also knows that he is not liable to remove a doubt when it grips him frequently, and that, were he to be liable for it, the opposite of the purpose intended by the Law would materialize for him, leading him to doubt the core beliefs of the Dńęn.

The author then alluded to the second such root by his statement: (Or entanglement), viz. a corrupt state, (in his intellect). In az-ZarrŇęq’s Commentary on Ar-RisńĀlah, we find: “One of the Sufi guides said that whispering did not befall other than a very sincere person, since it springs out of cautiousness about the Dńęn, and did not endure save in respect of an ignorant person with a mashed intellect, since clinging to it is part of following the ShaytńĀn.”

The harm of whispering only accrues to the detriment of the one who submits to it, which is why the author said: (The one who follows whispering is arrogant). That is the case since he believes that what he does is perfection, so he sees himself above others as regards being endowed with the status of perfection, which is the very essence of conceitedness. In Sahńęh Muslim we come across this from him, SallallńĀhu ‘alayhi wa-Sallam: “No one with an atom’s weight of arrogance shall enter the Garden” [Book of ń™mńĀn, Chapter on the prohibition of arrogance and its elucidation].

(He vouches for his own uprightness) and is satisfied with his own self, since he believes that he masters worship. (He harbours a bad thought of Allah’s slaves) since he considers those who do not act like him to be comparatively inadequate. (He relies upon) execution of (his own action), rather than upon the bounty and mercy of Allah. He in fact demanded from him, in his action, to carry it out in a sound manner or what on a preponderance of probabilities seems a sound manner, but He did not command him to actualize things in his action, since there is no way for him to attain that. Within the folds of such reliance on his own action, we may discern a bad thought of Allah. ZarrŇęq said in ‘Uddah al-Murńęd: “Were it not for his bad thought of Allah, he would not delve too deeply into the Dńęn.” (He admires it), i.e. his own action, since he feels that he fathomed what other people from the commonality of Muslims were unable to comprehend. In the hadith, we read: “Three things are agents of destruction: An obeyed avidity, a pursued appetite, and a person’s self-conceitedness” [Reported by at-TabarńĀnńę in Al-Mu`jam al-Awsat, AbŇę Nu`aym in al-Hilyah and al-Bayhaqńę in Shu`ab al-ń™mńĀn]. (He follows the ShaytńĀn), inasmuch as he is the one that calls him to that.