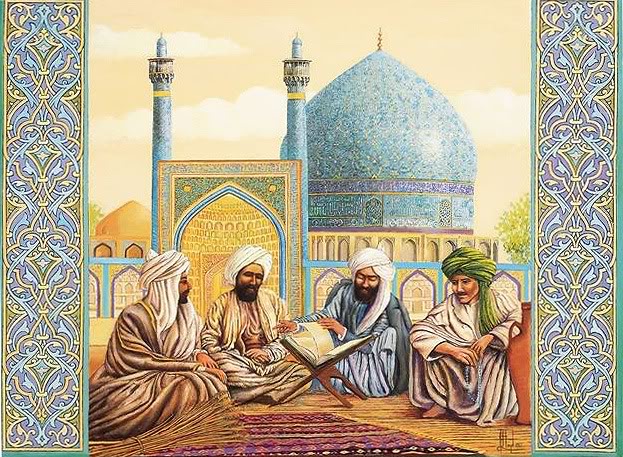 A great disservice is being done to devotees of knowledge, as savants should be spared financial worries and kept away from the humiliation of plying their “wares” in the scholarship market. They should be protected from dissipating their talents in worldly pursuits and the temptation to bend the provisions of the Law so as to secure thereby the material sufficiency which is owed to them.

The following is an extract from a letter penned by the Ghazālī of the Islamic West, Abū ‘Alī al-Hasan b. Mas`ūd al-Yūsī. The relevant section, on whether zakāt can be handed to adroit devotees of knowledge (‘ulamā’), follows the first part thereof which deals with the issue of the validity of a person’s Islam if he is not conversant with the meaning of the dual profession of faith:

“As regards his mention of handing zakāt to the people of knowledge (al-‘ulamā’) even when they happen to be affluent, as advocated in the work authored by (Ibn Marzūq) the Grandson and quoted with approval by al-Jannān (= Abū ‘Abdillāh Muhammad b. Ahmad al-Andalusī al-Fāsī, d. 1055 AH), and ostensibly based on the wording of (Khalīl)’s Mukhtasar, such a view does not represent the position of the madhhab, and issuing a fatwā to that effect is impermissible.

That is so as the recipients of zakāt are limited to the eight known categories listed in the relevant Qur’ānic āyāt which, by the unanimous agreement of Muslim savants, embed clear legal judgments.

Savants (al-‘ulamā’), judges (al-qudāt) and their like should be paid a sufficient allowance out of the Public Treasury (Bayt al-Māl), hence they are in no need to take receipt of zakāt. In the event that no Public Treasury operates or running it is unfeasible, a scholar who is in need of financial assistance from the pool of zakāt funds should be given a share of it. Any such learned person would in fact be more entitled to zakāt in that scenario than any other needy Muslim who might be eligible for it.

Allah is the reckoning Guardian over whoever ventures to issue a written fatwā about Allah’s Dīn without culling knowledge from its qualified masters, whereupon he becomes one of those who go astray and send others astray as described in the Prophetic hadīth. We ask Allah to grant us wellbeing and safeness”.

The renowned Mālikī polymath Ahmad b. Mubārak as-Sijilmāsī al-Lamatī (d. 1155 AH) authored a monothematic booklet (presently stored as a manuscript in the Public Library of Rabat) which he devoted to the general mas’alah of who should be saddled with discharging the obligation to financially provide for a scholar (‘ālim). In the course of tackling it he dealt with the specific question ramifying from it of whether, assuming the scholar has not received such maintenance he is entitled to by law from the Public Treasury, and the Muslim community at large has failed to fulfill that task in lieu of the Public Treasury, zakāt would be disbursed to him.